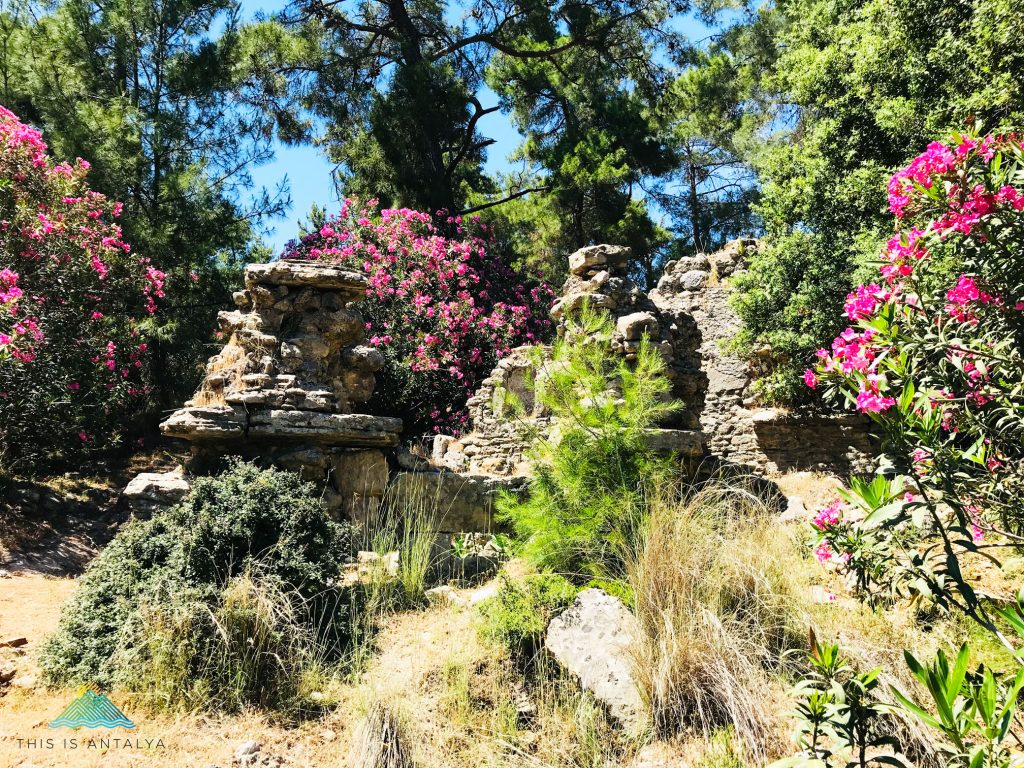 We visited Ancient Lyrbe in May of 2021 before fires ravaged the site and the surrounding countryside of Manavgat in the summer. In Spring, vibrant pink oleander gloriously draped the ancient walls and ground in this off the beaten path ruin. Equal parts shaded and open to the sun, it was vast and left us captivated. We took several hours to roam and imagine what life could have been like thousands of years ago in this mountain-top city.

Much is unknown about this ancient site and scholars are still in disagreement about its origin, as well as its name. This is largely because no real excavation work or studies have been conducted since the 1970s. Without archaeologists working onsite, Ancient Lyrbe has been left mostly untouched. Ancient rocks and columns are strewn throughout the city and there is nothing to prevent you or your kids from exploring freely. (This can be fun, but it can also be dangerous- so keep an eye on your kids.)

What ancient structures will you see?

Archaeologists agree that what remains in Lyrbe includes buildings from the Hellenistic, Roman and Byzantine periods.  Ancient ramparts, baths, temples, cisterns, tombs and a church are spread throughout.

By far the most striking and Instagram worthy spot is the still standing agora, which is one of the best of its kind in Pamphylia. Incredible photo opportunities hide in every corner! According to Turkish Archaeological News, the agora was “a rectangular square…once surrounded on all sides by colonnaded galleries in Doric and Ionic orders, and two-storied buildings. Originally, six gates led into the agora. The complex was built in Hellenistic times, in the 2nd century BC and later rebuilt twice – in the early Roman period and the 4tn or 5th century AD…. Many of the rooms at the agora were adorned with mosaic floors. Two beautiful specimens of such mosaics, depicting the Seven Sages of Greece and Orpheus, are now exhibited in the Archaeological Museum in Antalya.”

We were enthralled by this area and our kids had so much fun discovering interesting things. Be sure not to miss the tree covered tunnel-like area directly below the agora which has arched walls, fallen columns, and pieces of mosaic scattered around. If you hike up the hill from the agora and walk a bit to the edge, a majestic view awaits.

Also, as you wander around, don’t miss the hike to the remains of an early Byzantine church. Follow the trail down from the agora, around to the right and up to find it.

Our visit was on the first day citizens and expats who live in Turkey were allowed out of our homes after the last extended Covid lockdown in the Spring of 2021. This might explain why it was basically empty of other people. Regardless, it was magical and we were so devastated to learn over the summer that it had burned. Its beauty was largely the lush foliage that brought it life and it might be years before it looks that way again.

We have not been back, but because the tree cover is most likely still damaged, we suggest sunscreen, a hat, and water in the summer time. Even in May and with some shade, it was quite hot while we were there.

Wear comfortable shoes to hike around. Bring water with you, as well as snacks if you plan on staying for a while. There are no stores or markets close by.

We have heard that during high tourism season Lyrbe is a popular place for jeep safari tours, but can’t vouch for that ourselves. To avoid crowds, visit early in the morning or later in the afternoon.

How do you get there?

Lyrbe is about 10 miles (16 km) from the center of Manavgat.

You can get to Lyrbe easily by car, but be sure to follow the road signs and not GPS once you get close. There is a nice paved road all the way up to the site and ample parking.

You can also hire a driver or purchase an organized jeep safari tour from Side.

If you want to use public transportation, regular minibuses run from Manavgat to Bucak Şeyhler village. From there, you can walk the 1.5 miles (2.4 km) to Lyrbe.

Visiting Hours: Open all the time