Ruins of Ariassos Bring your imagination and hiking shoes

admin
1 year ago
Culture
No Comments 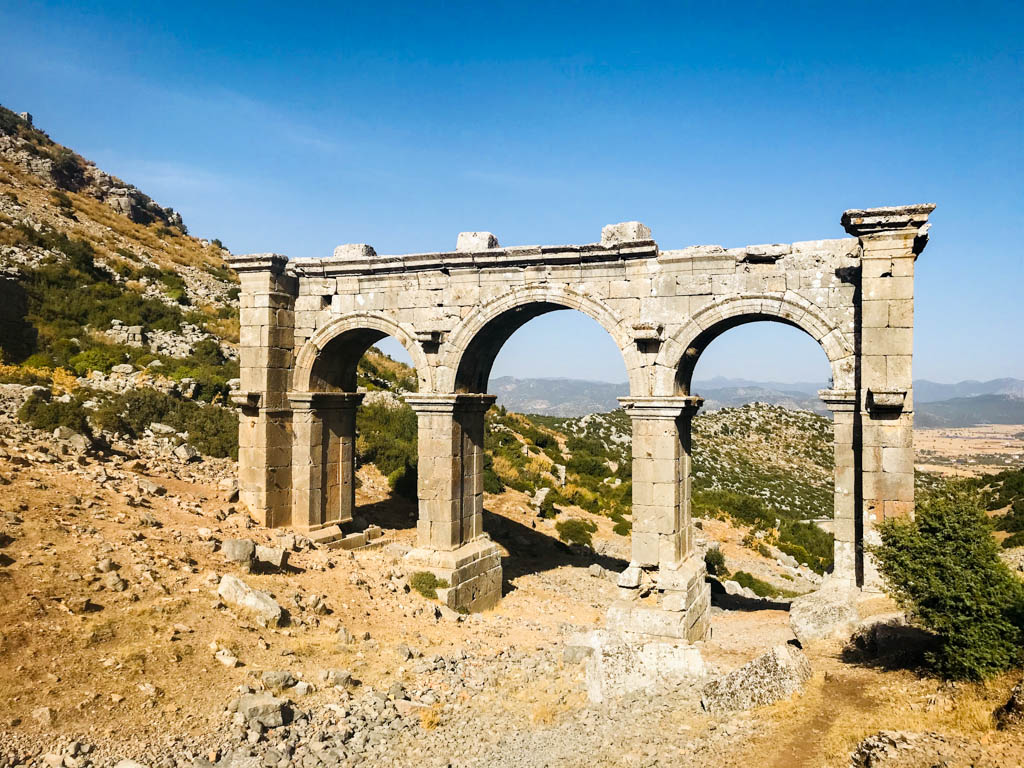 In a region where ancient sites in all different stages of restoration and disrepair can be stumbled upon around every bend, Ariassos is a “ruin” in the truest sense of the word. According to the lone informational sign on site, Ariassos was an “important city” from the Hellenistic Period (3rd Century B.C.) until the Byzantine Period (7th Century A.D.) because of its location as a crossroads between Pisidia and Pamphylia. But, other than the grand monumental three-arched gate believed to be from the Roman period still guarding what is assumed to be the entrance, it is challenging to imagine what this “important city” could have looked like in its glory days. Indistinguishable ruins of a basilica, gymnasium, baths, homes, and a collapsed theatre are scattered all over, and the only remnants that can be surmised with any certainty are some monumental tombs. Because of this, Ariassos is not a place for those who don’t like to use their imagination. It is also not ideal for people who have a distaste for uphill climbing and finding their own path amidst prickly plants and scattered rocks.

Our adventurous boys found the best part of Ariassos to be exploring beyond the gigantic monumental gate to the tops of the surrounding hills where ancient stones and ruins are strewn about. We headed straight up from the arch and then, at the top, turned to scale our way to the peak of the hill to the right of the arch. Following an obvious trail left behind by goats made navigating our way a little easier, but there were definitely some precarious moments of climbing up and over and down that required a little bit of risk and a lot of caution. The reward at the top of the hill is a cooler breeze and a breath-taking view of the surrounding mountains and valleys.

The basic trail up past the monumental arch is easily managed by children over the age of five, but we wouldn’t recommend younger kids going off the path. We would also advise bringing good hiking shoes, water, and sunscreen. There are no bathrooms, no cafes or services anywhere in sight, and there is no coverage or protection from the sun except for some tall ruins to hide behind. A small parking area at the bottom is easily accessible off the road and there is no entrance gate or fee. Just park, feel free to explore, and let your imagination and feet roam!

Getting there: You will need to drive yourself, or hire a driver, to get to Ariassos. It is easily found near D650 on the way from Antalya to Burdur. GPS navigation works perfectly and will take you directly there. About 51 kilometers north of Antalya, there is a turn-off that is clearly signposted, and Ariassos is just 600 meters away.