Olympos Antik Kenti An enchanting discovery by the sea 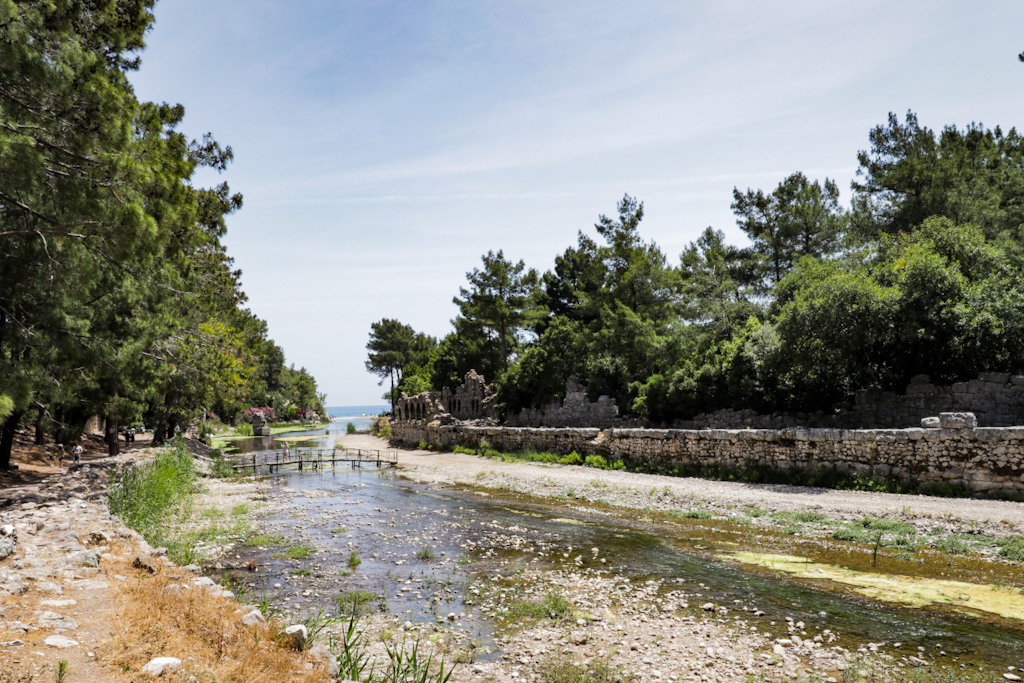 Found tucked in between the charming vacation village of Çıralı and the village of Olympos, the ancient city of Olympos (Olympos Antik Kenti) was once a magnificent city of the Lycian League. Much different than most of the ancient cities we have explored, Olympos feels unkempt and overgrown, but also slightly magical and other-worldly because of the verdant foliage and seaside location.

You can access the site from Çıralı after a deceptively LONG 3 km on foot to the western most part of the beach. (Take it from us, little children will begin to grumble before you get there unless you let them play in the water for a bit along the way.) You can walk in through a little cave tunnel in a big rock that stands before the entrance, or you can enter by car or minibus from the main gate, where there is a parking lot and the typical tourist amenities of bathrooms, a café, and souvenirs.

The picturesque beach entrance allows an immediate glimpse of the two sides separated by a wide stream, formerly a deeper river capable of floating large sailing ships in the days of old. The stream lends a certain tranquility to the area and start of your outing. The more developed east side encompasses clear paths, bridges, and informational signs. In particular, the area with the Harbour Monumental Tombs felt peaceful and idyllic, and we all delighted in the beauty and mystery of wandering around the forested ruins. However, as of June 2020, a good portion of the city (including the Episcopal Church and Bishop’s Palace) is off limits due to what appears to be excavation and/or reinstatement.

Getting over to the other side proved a little exciting as there is no marked path; we were instructed at the main gain to cross over the creek bed where we could….and this is where the real adventure began.  Only our two boys, ages 9 and 11, were up for the more challenging journey. They were a little nervous as we roamed without a map and just a hint of a path to guide us but were grateful afterwards for the spontaneously epic exploration.

We climbed up and down rocks and tread through waist-high weeds and reeds, all while jumping over puddles with tadpoles and prolific bugs to navigate to the other side. And once we got there, it involved more climbing and some guesswork on where we were going or what we were seeing due to sparse signage. We pinpointed the untouched theatre and ambled through a tunnel of tree branches a few meters – until we saw a swarm of bees and turned back.

As much as the east side of the stream appeared peaceful and ethereal, this part seemed like a rugged, over-grown Indiana Jones adventure that we weren’t sure how it was going to end. When we reached the farthest point that we felt safest going, in order to not have to go all the way back to where we had started, we had to scale down a hill of rocks and cross over where the water begins to flow through the stream. It was easy enough, but we ended up getting our shoes all wet. Note: Bring shoes that are durable and can also get wet if you want to explore the far side.

The benefit of the location of Olympos was that our two girls were able to hang out with Dad on the beach while we explored, making for a completely satisfied family in the end. For that reason, we think Olympos is a fun place to visit if you are either staying in Çıralı or want to spend a day with some quick exploration and beach time. Plan on about an hour for the ruins themselves if you don’t want to brave the rugged far side, but, if you have good hiking shoes and love exploring off the map, you could have an all-day adventure of a lifetime in this untouched ancient ruin in the forest.